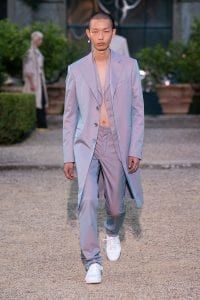 The designer who dresses Meghan Markle showing in a Florentine Palace where Queen Victoria sojourned in the late 1880s and early 1890s? It was hard to resist the anticipation that Clare Waight Keller might be drawing royal parallels in her first full-blown menswear show for Givenchy. In the event—which was held in the vast formal gardens of the Villa Palmieri—the connections she made were much more interesting and unexpected; ideas sparked between her own memories of the 1990s and the hyper-modern dandyism of today’s Korean street culture.

“I find what’s happening incredibly vibrant,” she said. “Particularly young men in Seoul, who are meticulous about fashion, sort of tribal, sort of cultish, and highly accessorized. They have a real passion for a look. Seeing them there reminded me of how we wanted to be in the ’80s and ’90s, of wanting to belong, to have the best of a look.” Her research opened her eyes: “Coming out of Asian culture, there’s this whole underground music subculture, where they take Art Nouveau typography and morph and liquefy it in computers to create album and CD covers. It’s super exciting.”

Waight Keller has new eyes on the current state of play in menswear. She’s entering into it at Givenchy at a time when the tailoring-versus-athleisure debate has been running for years. It’s a hard one to crack, but Waight Keller comes with experience, and a focus on innovation. She spent her 20s growing up as a designer at Calvin Klein and Ralph Lauren. “It was Ralph who gave me a classic education, a good education in tailoring,” she says. “I was in New York the whole of the ’90s, the best time. So that’s why I wanted to bring what I love, the tailoring. I dipped back—to a three-button suit, which felt modern again.”