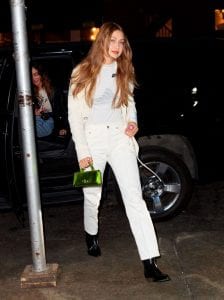 Supermodel Gigi looked chic in an all-white outfit carrying a green metallic mini Salvatore Ferragamo bag while she was out and about in New York City.

On the other hand, evergreen actress Julia Roberts was spotted attending Rita Wilson’s star ceremony on the Hollywood Walk of Fame on the 31st of March in Los Angeles. Julia looked stylish as ever in a custom Salvatore Ferragamo green double- breasted tailored suit, along with a trendy Vara Bow Rainbow bag.